From Tragedy to Success

Stepping into Barbara Wilson’s garage, one expects to see a car. Instead a large loom nearly fills the single garage space.

“I used to have four of these,” says Barbara. “Circumstances got me into it when I lost the use of my hands. That’s all in the book.”

A weaver and spinner, she’s recently written ‘From Tragedy to Success’ with the help of Forget-Me-Not Life Stories, a book that tells a personal story of great tragedy and loss, and how she managed to overcome it and rebuild her life.

Although her philosophy is to ‘love what you do. Having a passion is like having a dream, it feels like you never work a day in your life’, - at one point she felt like she couldn’t go on.

She and her young husband Harold were returning home one night in 1960 in their Ford Zephyr car, when a car hurtled towards them from the opposite side of the road. Hitting them head on, Harold died instantly, and Barbara ended up in hospital with two broken arms, completely losing the use of both hands. She was 29 years old with three young children aged nine, seven and five. Her life had been shattered and she felt it was over.

“I went through the windscreen. I was in hospital for a month and thought I was going to die as I’d lost so much blood. But I didn’t want to live.”

It was having to care for her children that inspired her to go on.

In those days children were not allowed to come visit patients in hospital, so family arranged a meeting at the Hamilton Lake.

“Once I saw those kids, I reckoned I had to get on with it. I said ‘come on Barbara, who is going to look after the children?’ “ 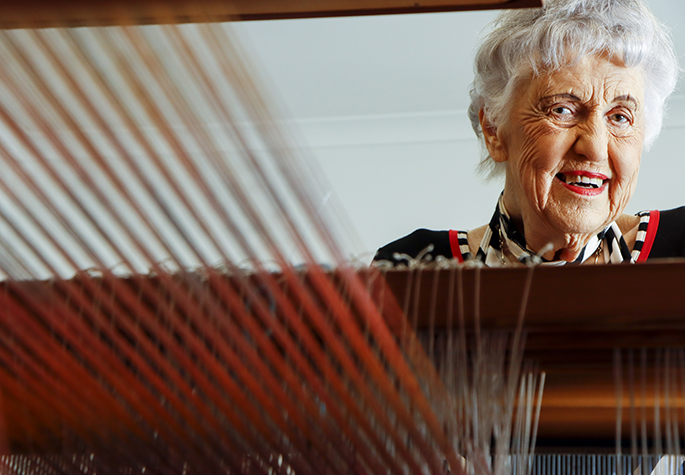 She made the courageous decision to rise above the tragedy and physical injuries, returning to their home at Round Bush Farm, which is also the site of the Hinuera Stone Quarry in the Piarere Valley.

Local farm stock buyer and family friend Peter Wilson visited regularly helping with the children who he’d known since they were babies. Eventually in 1962, Peter and Barbara married.

While on honeymoon, they stayed with a friend in Christchurch who was a spinner. She thought that spinning wool could be good for Barbara’s hands and so the very next day the couple bought a traditional spinning wheel and took it back home with them.

This was the beginning of a life that included starting a spinning group in Matamata, joining the Waikato Spinning Weaving and Woolcraft Society, and being part of what became an emerging industry of wool fibre, spinning, knitting and hand weaving.  Barbara started designing fashion wear and winning fashion awards. She also ran the Barbara Wilson School of Grooming for about ten years, teaching girls, modelling, photographic modelling, hair and skin care and overall presentation.

Her spinning and weaving have taken her all around NZ, including 20 years with the Dunkley’s Great New Zealand Craft Show, and sheep shows in Australia, fashion shows in London and West Germany, and tours to the US and Canada. On one tour to Chicago in 1988 she learned about painting leather, a technique she continued to use successfully for jackets and belts.

The NZ Wool Board asked her to present a fashion show in New Zealand House in London’s Trafalgar Square.

“It was tremendously exciting for me as it was the perfect way to introduce New Zealand’s beautiful wool to the London set.”

She’s won many awards from 1980 – 1993, including Waikato Designer of the Year for Handcraft Fashion; and been a finalist in the Benson & Hedges Fashion Awards.

“I wrote the book because I wanted to try to encourage people out there who have had lots of things happen to them.

“I’m still teaching weaving and spinning. I haven’t got the same energy I once had, but I’m trying to help people.” 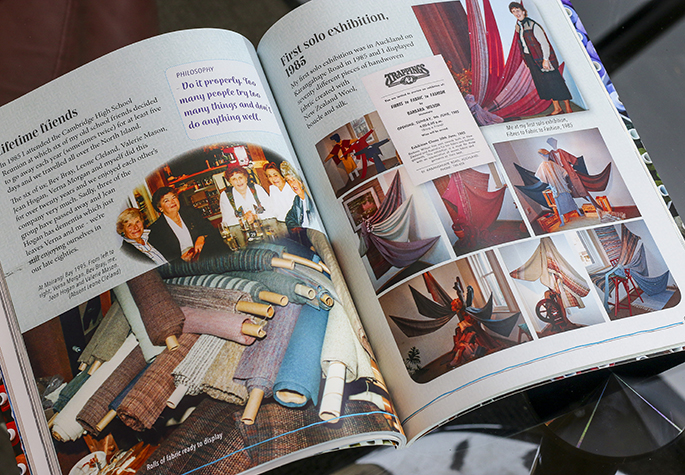 Barbara has created thousands of metres of fabric through her weaving. She’s made curtains, covered lounge suites, and designed and made fashion garments that have attracted international attention.

“And of course it was good therapy for my hands. You can actually do it if you’ve got the determination to do it.

She is able to remember every bit of her life.

“I only went to school to eat my lunch and play sport. Life goes so quickly.

“Tragedy hit us. I wouldn’t want anyone to go through that. I think I’ve done pretty well at this age.”

“I can’t believe it. It’s only a number though. I said to my older granddaughter Lauren who is with Tourism NZ – she is the one who instigated the book – I said to her ‘This is the last chapter in my life’, and she said ‘no Barbie, you’ll find something else to do’.

“I want this book to try and help other people. Because we can’t live in the past. Because you can do it.”

Copies of the book are available for $40 plus postage from Barbara Wilson on email barbarawilsonnz@gmail.com or phone 07 575 2193. 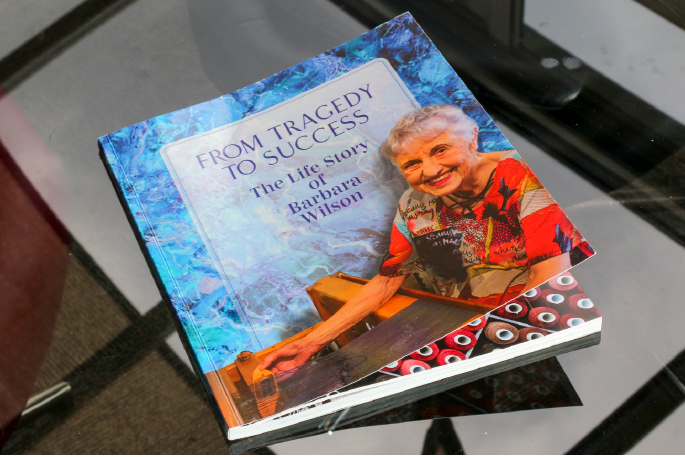